How do I pick my ketubah witness? 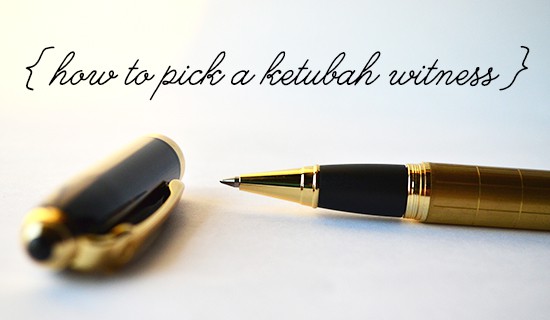 So, you’ve found a ketubah artist, picked out your ketubah text, and had your document personalized to fit your and your Rabbi’s vision. Good work! Time to cross that off your wedding to do list? Not quite. You still need to pick your ketubah witnesses.

Let me tell you a little bit about the various Jewish perspectives on this decision, and then I’ll tell you how we chose our witnesses (spoiler alert – we did things a little differently).

According to Orthodox Jewish law, a wedding ketubah is considered a binding contract as soon as it has been signed by the two witnesses. That means that the signatures of the bride, groom, and Officiant aren’t even required and only began showing up in ketubahs in modern times!

Different Jewish branches have diverging perspectives on who can be a ketubah witness.

Orthodox / Conservative: In Orthodox and Conservative communities, the two witnesses must be adult, male, observant Jews who are unrelated to the bride and groom.

Reform / Reconstructionist: In more liberal Jewish communities, the rules are often more relaxed and depend on the wishes of the specific Rabbi. Many Rabbis are fine with female and non-Jewish wedding guests as ketubah witnesses. Other Rabbis will fall somewhere in between the two perspectives.

Interfaith / Secular: When you’re having an Interfaith or Secular ceremony, all bets are off. Talk to your Officiant to make sure he or she doesn’t have any specific requirements, but other than that, you can ask whomever you please.

IMPORTANT NOTE: Whatever kind of wedding you’ll have, the most important thing is to talk to your Rabbi or Officiant ahead of time to make sure you understand any requirements that he or she has. You definitely don’t want any surprises during the ketubah signing ceremony!

But how do I actually pick my ketubah witness? 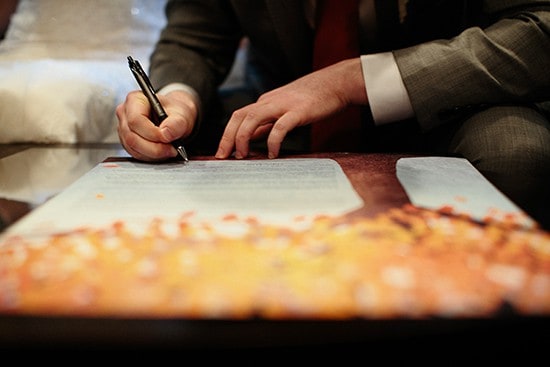 It will come as no surprise that signing someone’s wedding ketubah is an enormous honor. After all, you’re asking that person to seal your marriage with their signature, and to support your union in good times and bad.

When my husband and I sat down to talk about who would sign our interfaith ketubah, we agreed that we didn’t just want to ask close friends. After all, there are many ways to honor those you love at your wedding, but signing a ketubah is a special responsibility. So instead, we each spent some time thinking about which friends of ours had the type of marriage that we wanted to emulate in our own relationship.

I ended up asking my friend Carol. While her husband had passed several years before, I always saw their marriage as a beautiful, egalitarian partnership and as a source of strength and joy for both of them.

My husband asked his friend Mark, whose marriage was constantly filled with adventure, laughter and resilience, no matter what challenges came their way.

Now every time we look at our ketubah, we not only see the words we spend so long crafting together, but also the signatures of two dear friends whose marriages are a constant source of insight.

It may feel as though picking your ketubah witness is an easy task to cross of your list. But I encourage you to really give it some thought, and to pick people who will keep you inspired for many years to come.

Be the first to get special offers, updates from the studio, and more

It's hard to believe that today is the 1 year anni

Nothing I love more than getting a pic from a clie

This website uses cookies to improve your experience while you navigate through the website. Out of these cookies, the cookies that are categorized as necessary are stored on your browser as they are essential for the working of basic functionalities of the website. We also use third-party cookies that help us analyze and understand how you use this website. These cookies will be stored in your browser only with your consent. You also have the option to opt-out of these cookies. But opting out of some of these cookies may have an effect on your browsing experience.
Necessary Always Enabled
Necessary cookies are absolutely essential for the website to function properly. This category only includes cookies that ensures basic functionalities and security features of the website. These cookies do not store any personal information.
Non-necessary
Any cookies that may not be particularly necessary for the website to function and is used specifically to collect user personal data via analytics, ads, other embedded contents are termed as non-necessary cookies. It is mandatory to procure user consent prior to running these cookies on your website.
SAVE & ACCEPT